In my first Grand Canyon blog, I talked about the hesitations I had leading up to my first trip and how the first day, I ran a rapid poorly and ran the raft onto some rocks.

What I didn’t tell you is that later during that first trip, I flipped a raft. 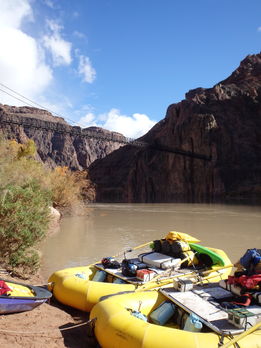 Fully loaded 18’ Sotar oar rig rafts. Upright. That’s right, I flipped an 18-foot Sotar Elite oar rig raft. It was fully loaded with dry bags full of people’s personal items. Also when the raft flipped, I dumped two other people in to the chilly waters of the Colorado River at river mile 69.9.

And the rapid where we flipped was rated as a two*.

Basalt Rapid is listed in the map and river guide as having a sleeper hole that can flip a raft. What it didn’t tell you is that the current will push you towards that hole so be prepared to line up far right at the top of the rapid and that, seriously, you don’t want to hit that hole.

But we hit it, and hit it just enough at an angle that our raft surfed for a few moments. And then began to sway. Instead of high-siding, I’m fairly certain all three of us abandoned ship for fear of being trapped in the raft-flipping hole under a flipped raft.

So then the question that everybody asks next, “WHAT DID YOU DO?”

Well, I came back above the surface of the water and quickly looked around to see if my fellow rafters were okay (alive). I soon saw them clinging to one another on the side of the boat, conscious, coughing a bit, but otherwise alive, awake, alert, and enthusiastic. The upside-down raft was right next to us and had flushed out of the hole so all three of us grabbed on and rode the rest of the small rapid clinging for dear life, staying afloat by our PFDs and the air that was trapped like bubbles in our dry suits.

The kayakers and other rafters helped guide our raft into an eddy. Though the shore was rocky, we managed to tie up the other rafts and gather any extra straps that could be found from them. These straps were tied on to the extra oar that was rigged along the side of the boat that was closest to shore. Then, our fearless leader gave us the instruction, “Everybody stand on top of the upside-down raft and pull towards the water. When it feels like it is about to flop back over, keep a hold of your strap, keep pulling and fall down into the water. The force pulling in this direction should get it right side up”

I remember thinking, “You want me to pull this raft loaded with hundreds of pounds of gear down on top of me? WHAT?” As if he heard this, he said, “Be careful. You don’t want to end up under the raft. Just wait till the last possible moment to bail.” 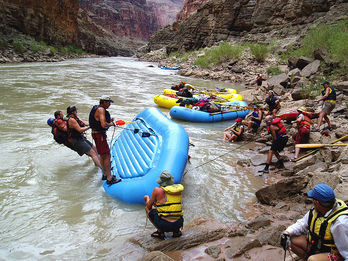 Thanks to oregankayaking.net for this photo. This isn’t our group but this is kind of what it looked like, except we didn’t have the support on land. We were just leaning back and pulling.

We all yanked back towards the river and though at first it felt as if we weren’t making any progress, then we could see the edge start to come up out of the water. When the boat was almost perpendicular to the surface, we quickly flopped down into the river behind us. Subsequently, the raft flopped right back over into it’s upside-down position. We had failed.

“We’ve got to hold on a little longer!” our leader commanded. We scrambled back to our feet and helped each other climb on top of the raft again. As we got in position, you could almost hear everyone thinking, “I really hope this works.”

“One, two, three! Pull!” We yanked on the straps and walked backwards. Those holding on to PFDs pulled back on each other until we started to see the edge of the raft pull up from the water again. “Keep going! Hold on!” we heard and then I felt my grip slipping on the PFD in front of me. I leaned back and pulled my cohort with me and then collapsed into the water. When I popped back up to the surface, I immediately stared at the raft. It was upright and glistening as the sun hit the layer of water that remained on everything on it.

At that point I remember taking a breath and realizing what a truly beautiful day it was, how the canyon walls were particularly magnificent, and how thankful I was for the sunshine. 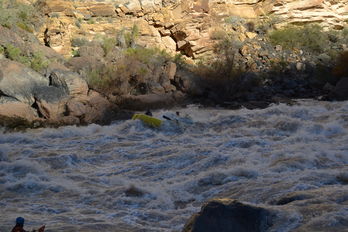 Blake and Ruby (in front) getting swallowed by a wave in Lava (rated at a 9). Photo Credit: Evan Alfano

“Alright, we gotta keep going if we are going to make camp,” said our leader. We hopped back in our boats, untied from the shore, and paddled on to see what else the day would bring.

Sometimes you flip a raft in the Grand Canyon. And then you deal with it. And you laugh about it with your friends that night around the fire. Sometimes you write home about it when you write your postcards that are sent from Phantom Ranch and delivered to the rim by mule and you include the line, “We flipped a raft. But don’t worry! Everything is great!”

Resilience, teamwork, positivity, and humor got our raft upright and these are skills that I get to practice every day at summer camp. They are applicable to backcountry adventures and in the every day world of school, work, family, and life. Is your child going to be prepared for the flips, flops, and challenges that come their way? And when they do encounter those experiences, will they grumble and feel helpless to the circumstances, or will they make a plan, jump in to action, and feel gratitude for what they have gained? When your family gathers together later, will they hide the story in shame of their mistakes or will they share it in a proud and jovial spirit for the uniqueness and absurdity of their plight?

So that’s the story of how I flipped a raft on the Grand Canyon on a two.* 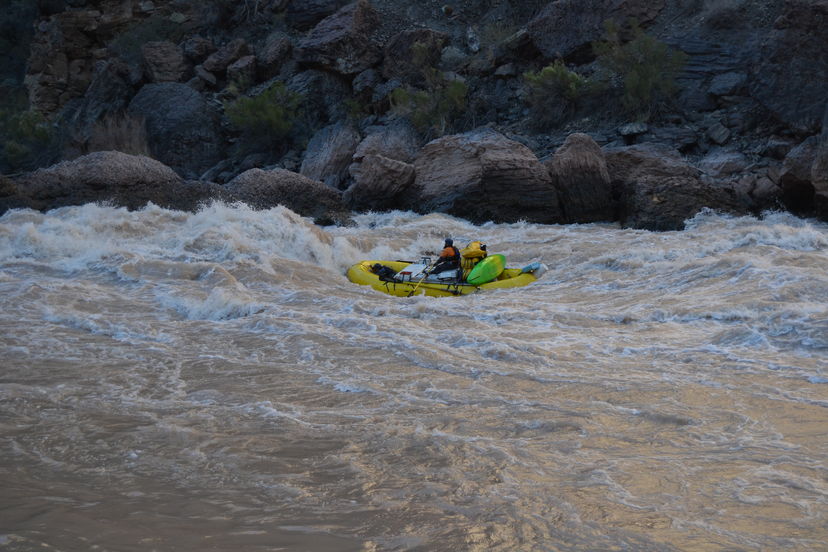 Approaching another wave in Lava. Notice that Ruby is totally ducking in the front as that wave towers above her. Photo credit: Evan Alfano

*This is particularly funny because the Grand Canyon, unlike most rivers, has its own rating scale. Rather than the traditional 1-5 rating that most paddlers are familiar with, the Grand has a 1-10 scale, which can roughly be interpreted as half-ing the Grand ratings to the regular scale so a 5 is a 3 and a 10 is a 5. Thus, the rapid that Ruby flipped on could be considered like a class 1.

**Except for the fact that the hole at Basalt Rapid is abnormally large and most everyone on Ruby’s second trip agreed that the rapid should be rated much higher because of that hole.

So you flipped a raft? 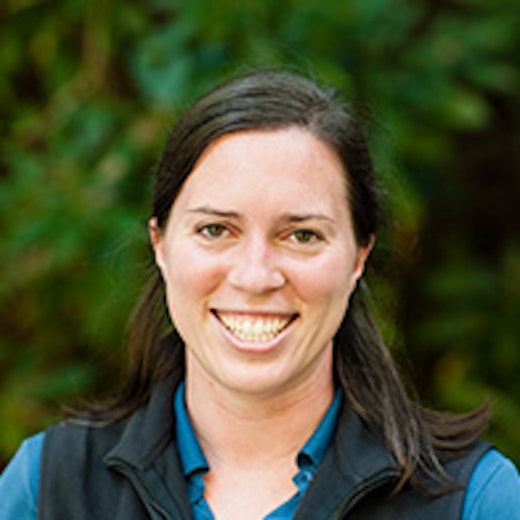 Ruby began her career in camping at YMCA Camp Widjiwagan in her hometown of Nashville, TN. At Camp Widjiwagan, she was a counselor who progressed over the years to camp administration. Prior to moving to Western North Carolina, Ruby taught experiential education at Nature’s Classroom Atop Lookout Mountain in Mentone, AL. Ruby found Green River Preserve to be a perfect blend of everything she loves: teaching environmental education, being curious about nature, calling contra-dances, singing about Itty Bitty Frogs, and learning from other outdoor educators. She is active within the American Camp Association, giving presentations at conferences and working as a faculty member of their e-Institute. Ruby is also an avid geocacher, runner, and Rubik’s-cube solver.