Humankind has been creating art for hundreds of thousands of years by carving, tapping, incising, scraping, pecking and scratching into rock to create petroglyphs or by painting with pigment to create pictographs on the rock surface. Sculptures have been found dating back 70,000 years in Germany and dating back 200,000 years in India. Some are recognizable animal tracks or human forms, while others are geometric shapes or wavy lines. These art forms could be methods of communication, symbols for ceremonies, or simply to create art. We will never really truly know the meaning or purpose of these pieces of art. But, with a lot of science and a little bit of imagination, we can infer meaning from the images.

However, we can be sure that these petroglyphs and pictographs were seen by people passing through western North Carolina long ago. Many of these petroglyphs are located near well-known ancient Native American trails. The landscape in the Southern Appalachians would have been much different when the petroglyphs and pictographs were created. The taller trees and open environment would have been inviting to itinerant animals collecting nuts and berries, in turn, attracting deer, elk and bear for hunting. Nearby streams and rivers would have provided fish and other water food sources. Much larger animals were in the area thousands of years ago including bison, saber tooth tigers and mammoths. Western North Carolina is riddled with exposed rock formations from granite domes to canyons, gorges, cliffs, balds, bivouacs, caves, boulders and waterfalls. Thousands of years ago, before colonization, old growth forests in North Carolina of spruce, fir, oak, hickory and pine would have towered over the ground, creating shaded understories beneath and providing a farther line of sight. These exposed rock formations would have been very visible to the Native Americans travelling through the area.

Green River Preserve is home to one of these state recognized petroglyphs. It is located on Long Rock, a bald approximately 200 meters East/West and 75 meters North/South, and beloved by our campers and staff. Long Rock sits on the westernmost edge of GRP, just to the west of Pinnacle Road. Looking west out Long Rock on a clear day, you can see for miles to the mountains of Georgia and Tennessee. In 2008, the Long Rock petroglyphs were recorded with the State Office of Archaeology by Lorie Hansen. The only etchings on the Long Rock that are identified as definitive ancient petroglyphs are two concentric circles. The site was recommended for future in-depth evaluation and recommended for nomination to the National Register of Historic Places.

Many other etchings on the rock surface appear to be man-made. At sunset, the petroglyphs on Long Rock dance above the rock, much more visible as the orange sunlight reflects off the rock surface. I have seen circles, wavy snake designs, straight lines, cupules (hand carved or pounded circular indentations), intersecting lines, and a figure that looks like a half man half eagle. Keep a lookout as you hike through Green River Preserve. There are many other potential petroglyphs located on Peggy’s Rock, Upper and Lower Balds and other rock faces throughout the Preserve. Future in depth studies can help determine the validity of these carvings adding to the Rock Art Survey of North Carolina.

As technology advances, mapping and dating techniques evolve, which can help archaeologists better determine the details and age of petroglyphs and pictographs in the area. Many North Carolina petroglyphs are believed to be thousands of years old. Nearby Judaculla Rock in Jackson County and Gardner Rock in Yancey County are both known ancient soapstone quarries. These two examples of petroglyphs are very densely covered with recognizable carvings ranging from animal prints, cupules, lines, and what look like handprints and figures of people. Thousands of years ago, Native Americans collected soapstone chunks to create bowls and figures. Judaculla Rock is believed to be a map of the area, with the lines representing rivers and cupules representing nearby villages. 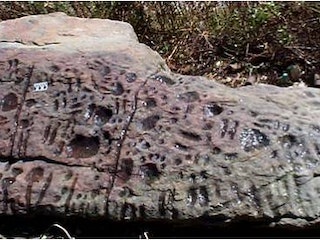 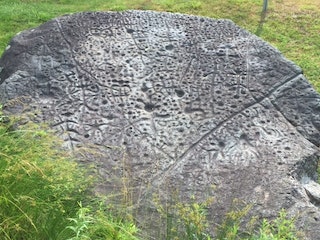 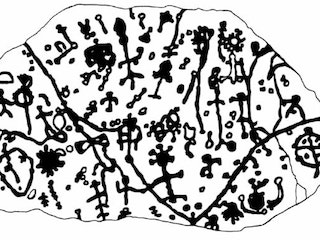 When driving through Western NC, consider a side trip to get out and discover the 50+ recorded rock art petroglyphs. Some are quite close to Green River Preserve. For more information on the North Carolina Rock Art study please visit the USDA website – Forests of North Carolina – Learning Center – History and Culture – Rock Art. In the next installation of Archaeology at GRP, we will examine thousands of years of Native American culture in North Carolina. Until then remember “Culture is Everywhere”.